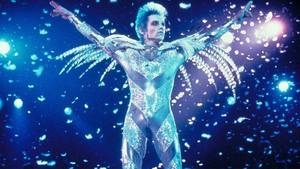 Synopsis:
Glam rock star Brian Slade (Jonathan Rhys Myers) plays a character on stage named Maxwell Demon who predicts his death on stage. Shortly after he announces his prediction, he fakes his own death and is exposed as a fraud. A decade later in 1984, a reporter and former fan, Arthur Stuart (Christian Bale), tracks down the former rocker to do an article on his life and downfall. Arthur interviews the man who discovered Slade and a peer (Ewan McGregor) to understand Slade's motivations.

Notes from our Film Programmer, Jennifer Sullivan:
“Although what you are about to see is a work of fiction, it should nevertheless be played at maximum volume” -opening title card

Velvet Goldmine was released in the late 90’s at the peak of “Cool Britannia”, when Britpop was massive and the bands who influenced them were getting (re)discovered by many. In 1998 I was dj’ing my own Britpop/60’s night called The Pill in Boston, and we were all very excited for this tribute to the 70’s glam rock scene. In fact, my friends and I practically filled the opening night screening at the long gone Nickelodeon Theater next to my BU dorm.

David Bowie would not give the film his blessing, and so Brian Slade aka Maxwell Demon (Jonathan Rhys Meyers) and Curt Wilde (Ewan McGregor) are composites of the looks and legends of Bowie, Iggy Pop, Lou Reed, Marc Bolan, Jobriath, and a heavy dose of Oscar Wilde.

Christian Bale is the reporter trying to answer “where are they now” and is quickly reminded of his own sexual awakening, propelled by the bold and unapologetic performances of glam rock’s decadent often androgynous style. Toni Colette, who is fantastic in every film, plays Brian Slade’s ex-wife, who is callously discarded as his star rises.

The original music in Velvet Goldmine is performed by The Venus in Furs, consisting of members of Radiohead, Suede and Roxy Music. Listen carefully and you’ll notice Thom Yorke’s voice overdubbing Jonathan Rhys Meyers . The band Shudder to Think contribute my favorite original song from the film, “Ballad of Maxwell Demon”. Classic glam rock anthems round out the movie and soundtrack.

Written and directed by Todd Haynes, Velvet Goldmine is a wonderfully overambitious often messy film that I hope you enjoy as much as I do each time I see it.