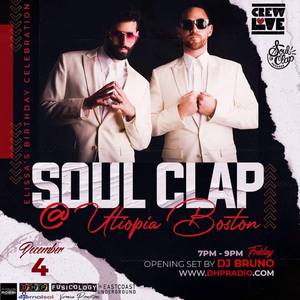 SOUL CLAP BIO:
Before today there was yesterday and after tomorrow is the future. Lonely C and Bamboozle’s paths were crossed for all time when a Sun Ra light beam sent from Saturn collided with the P-Funk Mothership and sent them tumbling to earth. Now, Soul Clap time travels on a musical spaceship of dopeness...Charles Levine aka Lonely C and Eli Goldstein aka Bamboozle cut their teeth in Bostonduring the 90’s rave heyday and quickly learned the power of P.L.U.R., a commitment to PEACE LOVE UNITY & RESPECT in the community, on the dancefloor, and in the DJ booth. They found an early mentor in Caril Mitro at local record shop Vinyl Connection, who taught them that HOUSE WEARS MANY HATS, “the ethos that the music we love comes in many shapes and sizes”.
These values have led to a one-of-a-kind take on electronic music that breaks through limitations and genres with a deep commitment to carry on the traditions of our musical foremothers and fathers.Spreading their wings beyond Boston, Soul Clap found acclaim through a series of edits, remixes and originals on Wolf + Lamb, and became a household name with their mixes of Extravaganza and Bakerman. They performed everywhere from The Marcy Hotel, to DC10, to Trouw, to Panorama Bar, to The Electric Pickle and on their travels discovered that EVERYBODY’S FREAKY UNDERNATURE’S KINGDOM.
EFUNK sounds like modern electronic funk and became their calling card, as the title of their first album in 2012, which lead to a collaboration with George Clinton and honorary entry into the P-Funk family. EFUNK remains a bridge between the discerning futurism of underground dance music and the charisma and boldness of the funk. EFUNK was followed by contributions to legendary mix series: DJ Kicks, Fabric and Watergate, and a second album, SOUL CLAP in 2016. Meanwhile they launched Soul Clap Records (which Mixmag called one of the best disco labels of the last decade), joined forces with Wolf + Lamb to found the CREW LOVE collective, and continued to share the knowledge; teaching courses, leading workshops, speaking on panels and always including forgotten classics in their DJ sets.
By harnessing the past Soul Clap looks to the future. After exploring solo ventures, they come back together with a series of EPs beginning with Run It ft. Baby Bam on Classic Music Company and followed by releases on Soul Clap Records and the newly minted EFUNK label. All leading up to a new Soul Clap album and launch of The Soul Clap Band, whose first incarnation as an eight piece ensemble on the main stage at Movement Detroit was a highlight of 2017. In anticipation, Soul Clap takes their EFUNK party on the road, growing from Detroit, Miami and New York in 2018 and featuring musical legends of the house, funk and rave worlds. Always pushing new boundaries, always traveling through time and space, The Clap is on a mission to change the world one dance floor at a time. Dr. Funkenstein has taught us well: free your mind, and your ass will follow.