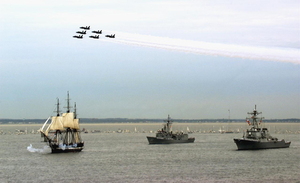 The USS Constitution Museum invites you to a conversation with the crew who sailed “Old Ironsides” for the first time in 116 years.

USS Constitution underwent a major restoration between 1992 and 1996 which refurbished her to the most historically accurate state of the 20th century. With “Old Ironsides’” keel straightened and hull significantly strengthened, Commander Michael C. Beck’s vision to sail her became a possibility.

Constitution could set up to 48 sails, however, for this historic sail the ship was equipped with only her “Fighting Sail”—the six sails used leading into battle. Funding for these sails came from public contributions through the “Old Ironsides” Pennies Campaign, modeled after the original Penny Campaign of the 1920s when school children across America donated pennies to the restoration of USS Constitution.

Thanks to the generosity of students and citizens across the United States the 1990s campaign purchased sails for “Old Ironsides” and on July 21, 1997 USS Constitution sailed under her own power for the first time since 1881.

Where did the idea of sailing Constitution come from?

What training was needed?

What did it feel like when “Old Ironsides” sailed free?

What was planned for the future employment of the ship after the sail?

How was this implemented?

Hear the answer to these questions and more from those who were there! This discussion will be moderated by Anne Grimes Rand, President of the USS Constitution Museum, and the panelists will include:

This event is FREE and open to the public. Unable to attend? Join us for a live broadcast via Facebook LIVE beginning at 10:30 a.m. ET. The discussion will be filmed and shared digitally via the Museum’s social media channels.