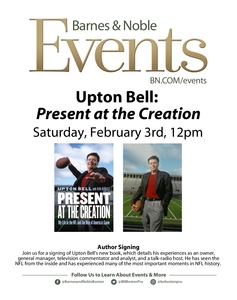 Present at the Creation details Bell’s firsthand experiences with being an owner, a general manager, a personnel executive, a scouting director for two Super Bowl teams, a television commentator and analyst, and a talk-radio host. He has seen the NFL from the inside and has experienced many of the most important moments in NFL history.

Bell was player personnel director for the Baltimore Colts when the team played in three championship games and appeared in two Super Bowls. At 33 years old, he became the youngest general manager in NFL history when he joined the Patriots in 1971. He left the NFL in 1974 to compete against it, joining the upstart World Football League as owner of the Charlotte Hornets, which lasted just two years. In 1976 Bell began his forty‑year career as a radio and TV talk-show host, yet he remains a football guy who was in the middle of the game’s most significant moments and knows that half the story has never been told, until now.