Unsinkable: Five Men and the Indomitable Run of the USS Plunkett 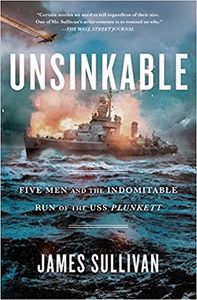 Author James Sullivan grew up listening to his great uncle, Frank Gallagher, tell the story of visiting his brother John on the USS Plunkett before he was lost in the Second World War– but, like many of his generation, Gallagher gave few details about what life was really like as a young soldier. Haunted by the untold sides of this family story, Sullivan set out to investigate for himself what happened to his lost great uncle, and countless men like him. The result, compiled from war diaries, action reports, letters, memoirs, and dozens of interviews, is Unsinkable. A thrilling and vividly rendered account of the Navy destroyer that endured the most harrowing attack of WWII, and the men who served and made their home on the ship, this illuminating history transcends appreciation of a single battle to tell the timeless story of young men stepping up to the defining experience of their lives.

Unsinkable traces the individual journeys of five men who served on the USS Plunkett during World War II. At the heart of the story is John Gallagher, who was born in South Boston and grew up in Dorchester on Oakton Ave. The intersection of Oakton Ave. and Adams St. was named John J. Gallagher Square by the city of Boston. The USS Plunkett was based at the Boston Navy Yard at various times during the Second World War, and many scenes take place in Boston. As we follow the ship through its five most notable battles – in Casablanca, Sicily, Salerno, Anzio – where it was nearly destroyed in the most prolonged, savage attack on a destroyer committed by German forces during the war – and finally, to its reappearance at Omaha Beach on D-Day, we see these everyday men forced by circumstance into acts of bravery and heroism, even as they try to hold onto who they were before they embarked on the ship. The Plunkett and its crew played an integral and dramatic role in the European theater of WWII. Unsinkable seeks to honor that legacy, and is a vital addition to the canon of wartime literature. Sullivan will also tell the tale of how he found this story, and the search that took him from Oakton Ave. to St. Louis and Denver, then on to Anzio and Naples and Sicily. More than military history, this is family history. See the Unsinkable webpage for more information at https://unsinkableplunkett.com/

James Sullivan was born and raised in Quincy, Massachusetts and has an MFA from the Iowa Writers’ Workshop. He has written for The New York Times and National Geographic Traveler, the magazine. He lives with his family outside Portland, Maine, 3.4 miles from the birthplace of film director John Ford, who steamed into Omaha Beach on the Plunkett.

Reddit
04/05/2022 18:00:00 04/05/2022 19:00:00 America/New_York Unsinkable: Five Men and the Indomitable Run of the USS Plunkett Author James Sullivan grew up listening to his great uncle, Frank Gallagher, tell the story of visiting his brother John on the USS Plunkett before he was lost in the Second World War– but, like ma... Boston Public Library, Boston, MA 02117 false DD/MM/YYYY