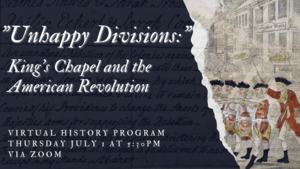 Join the History Program in commemorating Independence Day through this dive into King’s Chapel’s history in the age of American Independence. Discover the stories of members and clergy across social and political divides, and the story of the chapel itself during this critical period in American History.

This virtual program is free and open to the public. Donations appreciated. Please register in advance via Eventbrite to attend.

01/07/2021 17:30:00 01/07/2021 18:30:00 15 "Unhappy Divisions:" King's Chapel and the American Revolution The words “unhappy divisions” were preached by King’s Chapel minister Henry Caner more than a decade before the American Revolution, during a time of political tensions between Britain and the Amer... Online, Boston, MA 02110 Organizer Organizer e-mail false DD/MM/YYYY Reddit