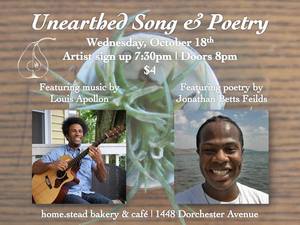 Unearthed Song & Poetry is an open mic series at home.stead bakery & cafe that happens every 3rd Wednesday of the month. Each month we feature a rising musician and poet and encourage any and all poets and musicians to sign up to share 2 pieces of their work. Doors open at 7:30pm and the show starts at 8pm. $4 cover at the door.

Our featured poet of the month is Jonathan Betts Fields. Jonathan was manufactured in Detroit, Michigan. He was raised by libraries and art museums, and received the Key to the City from Rosa Parks before he was five feet tall. Often found staring at clouds, Jonathan is a graduate of Howard University and Harvard Divinity School. He dreams in haiku since creative writing class with Sonia Sanchez, sonnets since studying with Marilyn Nelson, and in the future tense since sitting under Josh Bell. Minister Fields was ordained by Hartford Memorial Baptist Church in August of 2013, and thoroughly enjoys working as a Teen & Young Adult Minister and an Interfaith Counselor. He enjoys tennis, travel, reading, writing, laughing, learning and discussing religion, spirituality, morality, beats, rhymes and life.

Our featured musician this month is Unearthed's own Louis Apollon. Louis Apollon and is an original jazz-folk artist with a writing style that is heavily influenced by Jazz and World music. With his work, he tries to create a space where people can let go of their differences, feel uplifted and safe through the powers of music. While pulling from a diverse mix of musical styles, he brings an exciting mix of cultures, energy, and an infectious positivity to his live performances. He recently released his debut album Free to Be this past September which features his trio along with some special guests and is excited to share it with the world.

The Deli Magazine's Brian Vernake wrote of the album, "The first single 'You are a Dream' embodies the character of 70's soul giants, like Al Green, with Louis' own jazz/folk flavor... Louis creates a nostalgically romantic musical venture, a balance of simplicity and technical prowess". My music has been described by nationally-acclaimed Janice Pendarvis - who has worked alongside Sting, the Rolling Stones, and David Bowie - as having an "angelic, magical quality... It’s the kind of voice that makes you just want to relax, sit and listen forever. Hearing him sing is a healing.”
www.louisapollon.com