Underwater Wild: My Octopus Teacher’s Extraordinary World A Conversation with Craig Foster and Living on Earth 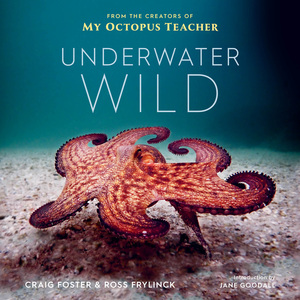 The 2021 New England Aquarium Lecture Series continues in December with a conversation between filmmaker, naturalist, and Sea Change Project co-founder Craig Foster and acclaimed journalist and Living on Earth host Steve Curwood. The duo will discuss never-before-recorded scenes of marine life and why these novel experiences hold meaning for us all. Underwater Wild, Foster’s new book (with Ross Frylinck), is based on experiences he chronicled while making his Oscar-winning documentary My Octopus Teacher. Underwater Wild offers a window into Foster’s free-diving explorations in the frigid ocean kelp forests of False Bay, located on the Western Cape of South Africa. Using his extraordinary animal tracking skills, Foster uncovers a plethora of new aquatic animal behaviors and species, including a new shrimp named in his honor: Heteromysis Fosteri.
This Aquarium Lecture Series event is free to the public and presented in partnership with the Living on Earth Book Club, live radio interviews with authors of the latest environmental books; the Lowell Institute; and the UMass Boston School for the Environment.

Craig Foster is a co-founder of the Sea Change Project and one of the world’s leading natural history filmmakers. He has dedicated himself to learning the secrets of the Great African Seaforest – the inshore kelp habitat at the South West tip of Africa, his underwater home. Foster is an Academy Award-winning natural history filmmaker and co-founder of Sea Change Project, a nonprofit organization dedicated to connecting people to the wild through fact-based storytelling. His Academy Award-winning film, My Octopus Teacher, follows the story of his year spent filming a wild octopus, at the same time honoring a self-made pledge to dive every day for a year.

Steve Curwood is the executive producer and host of Living on Earth. Curwood created the first pilot of the show in 1990, and it has run continuously since April of 1991. Curwood has been a journalist for more than 30 years with experience at NPR, CBS News, The Boston Globe, WBUR-FM and WGBH-TV. He shared the 1975 Pulitzer Prize for Public Service as part of the Boston Globe’s education Team. Curwood is also the recipient of the 2003 Global Green Award for Media Design, the 2003 David A. Brower Award from the Sierra Club for excellence in environmental reporting and the 1992 New England Environmental Leadership Award from Tufts University for his work on promoting environmental awareness. He is the president of the World Media Foundation, Inc. and a Lecturer in Environmental Science and Public Policy at Harvard University.