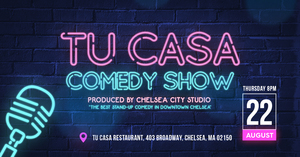 Tu Casa Comedy is back to ring out the summer and welcome the season of Pumpkin Spice (too soon?) on August 22nd with an all new line-up (kinda..)!

Sean Sullivan, named one of the top comics in Boston by the Boston Herald, Boston Globe and more and who had his television debut on Comedy Central, will have his Chelsea, MA headliner debut at Tu Casa Comedy at our August 22nd show!

Doors open at 7:00pm for dinner and drinks.

Be good to the DJ and there may be a party after the party...