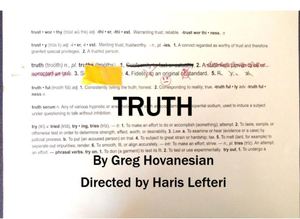 In the back room of a presidential campaign, where Republican staffers drink stale coffee and sling barbed emails, a storm is brewing. It concerns security. It concerns privacy. It concerns racism. It concerns sex. It concerns a loss of innocence, a lack of ethics, and the threat of violence. But most importantly, it concerns ‘Truth’, a word that has been abused, scandalized, misrepresented, and torn apart in recent years. As four campaigners work to cover up a scandal deep into the night, decisions will be made that change the lives of them all. And as they work, the meaning of the word ‘Truth’ will take on forms that they never thought imaginable. By Greg Hovanesian, Directed by Haris Lefteri, Starring Danny Breen, Jonathan Barron, William Miller, and Molly Weinberg. Followed by a talkback session with the playwright, director, and actors.