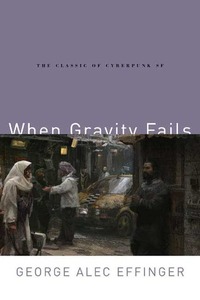 July's book is When Gravity Fails by George Effinger!

The Trident "SF" Club is for lovers of Science Fiction! The club's reading selection will run the gamut between 19th century "speculative" fiction through the heady days of 60's luminaries such as Philip K. Dick, J.G. Ballard, & Ursula Le Guin, up through the 80's & 90's with selections from William Gibson, Kim Stanley Robinson and Damon Knight - and many more! This club's purpose is to celebrate the conceptual possibilities for better (and worse) futures past & present, and to discuss the import of those concepts to our present dystopia

In a decadent world of cheap pleasures and easy death, Marid Audrian has kept his independence the hardway. Still, like everything else in the Budayeen, he's available…for a price.

For a new kind of killer roams the streets of the Arab ghetto, a madman whose bootlegged personality cartridges range from a sinister James Bond to a sadistic disemboweler named Khan. And Marid Audrian has been made an offer he can't refuse.

The 200-year-old "godfather" of the Budayeen's underworld has enlisted Marid as his instrument of vengeance. But first Marid must undergo the most sophisticated of surgical implants before he dares to confront a killer who carries the power of every psychopath since the beginning of time.

Wry, savage, and unignorable, When Gravity Fails was hailed as a classic by Effinger's fellow SF writers on its original publication in 1987, and the sequence of "Marid Audrian" novels it begins were the culmination of his career.

Get 20% off the book online or in store with the coupon code GRAVITY20!