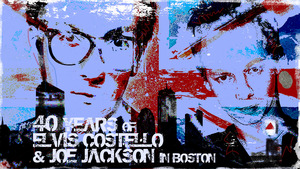 Boston musicians John Powhida and Friends and Dee Zaster and The Designated Drivers with Special Guest Corin Ashley will pay tribute to the music of Joe Jackson and Elvis Costello.

It was 40 years ago today, on March 29, 1979. Elvis Costello and The Attractions rolled into The Orpheum Theater in the middle of their Armed Forces tour. It wasn’t their first Boston show, but this time it was different. They were angrier and more guarded than usual, not interested in talking to the press and yet once he hit the stage, Elvis delivered! This was the review in the Boston Globe:

“Last night show was Costello’s best in Boston. This time Costello demonstrated superior pacing, much more professional lighting and yes, he even smiled. Costello played non-stop, like The Ramones and The Clash in this respect but with considerably more melody, until he paused midway through to acknowledge a near-standing ovation”

Only two months later, on May 25, Joe Jackson would make his first Boston appearance. Coming into town on the wings of the hit single Is She Really Going Out With Him? which would also earn him is first Grammy Nomination, for Best Rock Vocal Performance - Male, the Joe Jackson Band rocked the Berklee Performance Center with the same force and anger that Elvis Costello had at The Orpeum...something that was not lost to The Boston Globe,

“Jackson has often been compared to Costello and there were clearly hints of Elvis, but Jackson, while his show was angrier than I had expected, was nonetheless much more down-to-earth and approachable than Costello’s. While Jackson continually reminded us of the conformist ruts we all fall into, he did turn into an unabashed crowd-pleaser by the end”

This double appearance was the beginning of a love affair between Boston and the two English songwriters that still continues 40 years later. The two have also had a profound influence on the development of many Boston artists.

This is what makes this show different from a traditional tribute show: it is an opportunity for some of the city’s best and most beloved musicians to pay tribute to two artists who have shaped and influenced their music. While the focus will be mostly on the early phase of their careers, there will be a few hits from the later years.

Special guest Corin Ashley has been a mainstay of the Boston music scene for the past 30 years. In the 2000’s he led Boston mod-pop heroes The Pills, as they released three albums and toured extensively around the U.S., Canada, and Europe, opening for or performing with The B-52s, The Libertines, Supergrass, Sloan, Edwin McCain, The Wrens, Juliana Hatfield, The Smithereens, Nada Surf, Jimmy Cliff.

John Powhida and Friends will play the music of Joe Jackson. Johh Powhida has won the 2011 Boston Rock’n’Roll Rumble with his band John Powhida International Airport, and was also known as the lead singer in the Rudds. A sought after vocalist, after opening for his musical hero Todd Rundgren in the 1990s, he recently has been a featured vocalist for Todd Rundgren Utopia. He has also backed Graham Parker.

The hardest working man of the night will be Peter Moore on keyboards and vocals. Peter leads Boston band Count Zero and was also at the helm of the legendary Boston Music award winning Think Tree . Peter toured as a performer internationally as a member of Blue Man Group’s touring band. Bassist Jim Haggerty has performed onstage with Peter Wolf and performs regularly with many of Boston’s top songwriters including Dennis Brennan and Kimon Kirk. Charles Hansen should be familiar to concert goers and leader of his own original band Gymnasium and as a member of the very popular Handymen and Rockbottom. Drummer Andy Plaisted can be found nearly every night of the week in a Boston club, providing his ace drummer with the likes of Tim Gearan, the Giant Kings, the White Owls and Amy Correia.