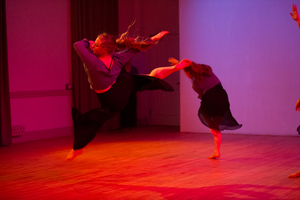 Transitional State attempts to describe, through a nonlinear narrative, characters overwhelmed by life transitions leading to a state of emotional unraveling, expressed through the movement and laughter. Through mercurial weight shifts we will explore how these sudden shifts, optimistically force us to adapt.

Phases, a duet for longtime friends and dancers Karen Klein and Kelley Donovan, depicts movement and performance at different times in one’s life. The Body Becomes the Messengerattempts to show how our body thrives when all is integrated and in balance. When we try to have our mind, heart and soul work without addressing our body’s needs and concerns, we battle against ourselves. Only in true union of all of parts of ourselves can we be at our strongest and best.

teXtmoVes founded by Karen Klein, works in the interdisciplinary intersection between spoken word and movement, exploring their boundaries and connections. It is the goal of this collective to bring intergenerational performance works which integrate dance and poetry to diverse audiences.

Don’t Break the Circle, a new production by teXtmoVes, choreographed to a poem by Klein about Yevgenia Lazerevna, a Russian woman soldier, a brigade leader captured by the Nazis in World War II and sent with her female troops to Ravensbruck. Her heroism allowed them to survive. Nearly forgotten by history, Lazerevna is remembered in this work performed by 6 dancers. textmovescollabora.wixsite.com/textmoves

Kelley Donovan splits her time presenting work in both Boston and New York City and has performed work by Ann Carlson and Liz Lerman. She is on the faculty at UMass Boston and has been a guest artist and teacher at many colleges including Roger Williams University, Salem State College, Boston Center for the Arts and has had work commissioned by World Music/Crash Arts. In New York City she has shown work at Movement Research, The Cunningham Studio, Duo Theater, The Joyce SoHo, The Hatch, The Fresh Fruit Festival, Galapogos, Gibney Dance Center and the 92nd St. Y. Her work has received financial support from The Artist Foundation of Boston and the Massachusetts Cultural Council. Kelley studied choreography with Mark Morris and Bessie Schönberg.