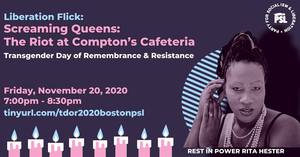 Join PSL Boston to honor Transgender Day Of Remembrance (TDOR) with a film screening and discussion on the documentary, Screaming Queens: The Riot at Compton’s Cafeteria. The documentary tells the story of the first known act of collective, militant struggle by trans people, specifically trans women and drag queens, in the face of police harassment and repression in San Francisco’s impoverished Tenderloin neighborhood in 1966. The Riot at Compton’s Cafeteria, which happened three years prior to the Stonewall riot, illustrates that trans resistance and struggle has historically been a dynamic force, deeply intertwined with the broader fabric of resistance in the U.S - including the anti-war, civil rights, and Black Power movements.

TDOR is commemorated annually across the U.S with its origins in Boston. The first recognized commemoration of TDOR occurred following the horrific 1998 murder of Rita Hester, a Black transgender woman living in Allston. Hester was a role model for transgender youth in her community and a lover of figure skating. The impunity and transphobic journalism surrounding her life and case became a flashpoint for others in the transgender community who sought justice for her stolen life.

As of October this year alone, at least 34 trans people have died at the hands of transphobic and state-sanctioned violence. Like Mother Jones, militant labor organizer said, “pray for the dead and fight like hell for the living.” We must mourn and honor our lost siblings whose lives have been lost senselessly, while also understanding that it is all of our duty to continue on in the struggle for transgender liberation.