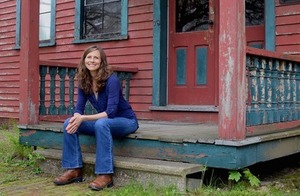 "One of the finest singers and musicians anywhere in folkdom" (Boston Globe) and "a musician and singer of dazzling versatility" (No Depression), Tracy Grammer is among contemporary folk music's most beloved artists, renowned for her pure voice, deft guitar and violin work, and incantatory storytelling, Grammer has recorded and performed with Joan Baez and Mary Chapin Carpenter, and has enjoyed 12 years as one of folk radio's top-played artists, both solo and, until his untimely death in 2002, in a duo with the late Dave Carter.
From 1998-2001, the duo released three internationally celebrated, chart-topping albums featuring Carter's poetic Americana songcraft and Grammer's beautiful voice. In Dave Carter's own words, "Tracy has one of the most beautiful voices I've ever heard in my life. There's also a sadness and sorrow and pain and depth of knowledge to Tracy's playing. I really think there's nobody like her in the world." They toured at one point with Joan Baez, both as featured artists and as Baez's bandmates. Called "the new voice of modern folk music," the duo was clearly in its ascendancy when, in July 2002, Carter on mid-tour suffered a fatal heart attack.
At some point, Grammer discovered that writing songs was the most effective medicine for the pains and unresolved questions of her life. "Low Tide" is an album of revelations, confessions, and, ultimately, healing. She took risks. She tried new approaches. Co-produced with long-time touring partner Jim Henry, "Low Tide" was released in January 19, 2018 on Grammer's own label. It jumped to the top of the charts and garnered great reviews. "Potent songcraft that reflects the tender and stubborn heart that got her here, and a way with words and images that doesn't so much transcend the legacy of her earlier work as it marks the beginning of a new path to glory. A bold and beautiful collection" (Coverlaydown.com). "Low Tide" was the #9 most played album in 2018 on folk radio around the country.