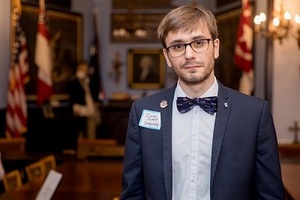 Julien Icher is a 25-year-old French entrepreneur, web developer, geographer, and historian enamored with the United States. He is the Founder and Executive Director of The Lafayette Trail, a Franco-American effort to document, map, and mark the footsteps of General Lafayette across the United States during his 1824-1825 Farewell Tour (www.thelafayettetrail.com).

This presentation will highlight Julien's efforts in New England with the Massachusetts and New Hampshire state legislatures while discussing his experience traveling more than 22,000 miles across the United States almost 200 years after Lafayette's fourth and last visit to his adopted land.

Diaries and correspondence from NEHGS special collections documenting portions of Lafayette's farewell tour will be on display.