Traces and Tracks: Journeys with the San 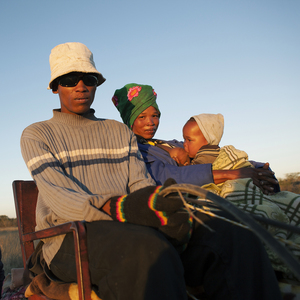 For nearly three decades, Paul Weinberg has traveled to Namibia, Botswana, and South Africa to document the lives of hunter-gatherer communities, the San (Africa’s first people), and their struggles to hang on to their land, culture, and values as they faced serious threats by outside settlers. Weinberg will discuss his book Traces and Tracks (2017, Jacana Media), the culmination of his thirty-year journey, featuring essays and over 100 photographs that convey the modern-day San’s daily lives, their relationship to nature and game parks, and their ways of adjusting to a fast-changing world.

Paul Weinberg is a South African-born documentary photographer, filmmaker, writer, curator, educationist, and archivist. He began his career in the early 1980s working for South African NGOs, and photographing current events for news agencies and foreign newspapers. Weinberg’s large body of work portrays diverse peoples, cultures, and human environments, and reflects a sustained engagement with Indigenous people throughout southern Africa. His images have been widely exhibited and published in South Africa, among other countries. He has taught photography at the Centre for Documentary Studies at Duke University and holds a M.A. from the same university. He currently lectures on documentary arts at the University of Cape Town.
http://paulweinberg.co.za/

Lecture and Book Signing. Presented by the Peabody Museum of Archaeology & Ethnology in collaboration with Documentary Educational Resources.