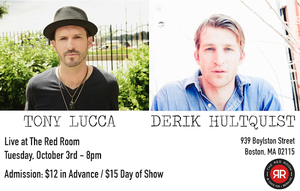 Tuesday / October 3, 2017 / 8:00 p.m.
Add to Calendar
Red Room at Cafe 939
939 Boylston Street, Boston, Massachusetts, 02115, United States (view map)
Tony Lucca
Tony Lucca
Image courtesy of the artist
Tony Lucca was born on the outskirts of Detroit on the heels of Motown's heyday. He was raised within the loving confines of an enormous family of musicians. His mom was the 10th of 12 kids who all sang and played. At the age of 12, Lucca had his first paying gig as a musician at a junior high school dance. By the time he was 15, he had been cast in an extraordinary group of rising stars on the All New Mickey Mouse Club alongside Justin Timberlake, Ryan Gosling, and Britney Spears.

Shortly after graduating from high school, Lucca wound up in LA and embarked upon an independent recording career that would span over 20 years. Along the way he's toured with major artists such as Maroon 5, Kelly Clarkson, *NSYNC, and Marc Anthony. Lucca won the LA Music Award for best male singer-songwriter in 2001 and has appeared numerous times on Last Call with Carson Daly, as well as the Wayne Brady Show and the Tonight Show with Jay Leno. Also, in 2013, Lucca was the sole entertainment for FOX's NFL Thanksgiving Day telecast of the Detroit Lions vs. Green Bay Packers game.

When Derik Hultquist declares “my life is defined by parallel lines,” people may assume they are listening to a road-weary troubadour who is reflecting on a long musical journey of one-night stands and playing for tips. While Hultquist certainly hasn’t been exempt from these experiences, the twenty-something is sharing more of his personal narrative than simply recounting his musical reality. An east Tennessee native, Hultquist has always been drawn to a life equal parts imagined as realized.

Hultquist’s work could lead one to draw obvious comparisons to the likes of Jack Kerouac or John Steinbeck. After delving deeper into the crux of Hultquist's writing, though, there is a semblance toward a Langston Hughes or Ernest Hemingway association instead, as witnessed when he closes his new project with his own spin on a love song with “Parallel Lines” and the meditative “Country Song.”