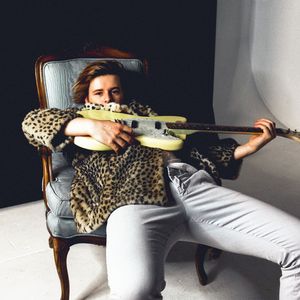 Tommy Newport is an 18-year-old singer-songwriter and record producer. Born in Manchester, England, Newport relocated to the United States with his family when he was 6. From there, he bounced around, living in Dallas, Texas, and Seattle, Washington, before settling down in Wichita, Kansas.

Newport puts all his skills on display on his debut album, Just to Be Ironic. Support for Newport has been strong since the start, with cosigns by BadBadNotGood, Giles Peterson, and Sticky Fingers. His music has also been in rotation on Best of the Week by Apple Music and has been featured on HBO’s hit show Ballers.

Newport independently released the album So Long and Thanks (under the name Milmine) in 2017 with no promotion or marketing. The project still received more than 2 million streams across YouTube, Spotify, and Apple Music. The 13-track album is a personal diary from Newport and the album’s coproducer, Toronto, Canada–based producer 4th Pyramid.

Newport has the heart and soul of a true musician. After the release of his first single, “I Forgive You,” a funk soaked ballad that takes listeners deeper into his idyllic world, the buzz began to spread. Newport is moving forward in full force into 2019 with the announcement of his own headlining tour across North America.

Jackson Lundy is a singer-songwriter from New York whose music is a blend of R&B, jazz, and neo-soul. Mixing softer songwriting with hip-hop inspired drums and 808 bass gives, Lundy's music has a unique sound and can be played at a party or just on a long drive. His new single, “Calypso,” surpassed one million streams on Spotify and was number 4 on the United States viral list for a day.