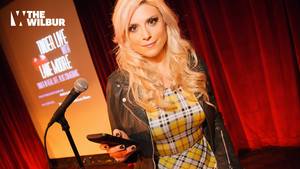 Lane Moore takes you on a hilarious journey through the realities of online dating during Tinder Live! With Lane Moore, an interactive, anything-can-happen comedy show.

Lane, an award-winning stand-up comedian, actor, writer and musician, opens her Tinder account to audiences and invites them to join her in real-time, as she swipes and messages (and sometimes talks and texts) with Tinder matches who have no idea they’re part of the show.

Along the way, Lane delivers sidesplitting commentary with oftentimes outrageous tips and tricks for surviving the world of online dating.

Based in New York City, Lane writes regularly for national publications like “The Onion,” and she appeared on season five of HBO’s GIRLS. Her band “It Was Romance” has been touted by “BUST magazine” and Pitchfork for its self-titled debut album.

Acclaimed by audiences across the country and named on The New York Times Critic’s Picks, and called one of the 5 Best Comedy Shows in NYC by CBS, Tinder Live! With Lane Moore is truly a must-see performance for those seeking authentic and hilarious perspective in today’s world of digital communication.