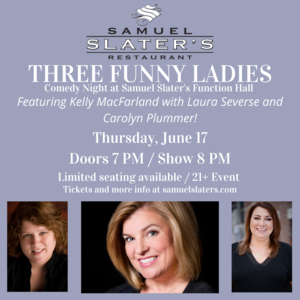 Kelly MacFarland is an accomplished improviser and comedic actress. You may have seen her on The Today Show, Comedy Central, and NBC's Last Comic Standing.

Laura Severse is a streetwise Boston native and has been featured as a Best of Boston Comic in showcases at the Comedy Scene, Laugh Boston, and Nick's Comedy Shop.

Carolyn Plummer has been doing comedy professionally for over 15 years. She has worked at clubs, colleges, dead animal lodges, theatres, and corporations appearing with many of the top headliners in the business. Carolyn has participated in numerous festivals including the Burbank Comedy Festival, Boston Comedy Festival, and The Women in Comedy Festival.

Dine at Samuel Slater's Restaurant beforehand or order off their limited menu during the show!