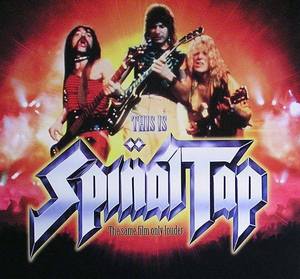 Synopsis:
"This Is Spinal Tap" shines a light on the self-contained universe of a metal band struggling to get back on the charts, including everything from its complicated history of ups and downs, gold albums, name changes and undersold concert dates, along with the full host of requisite groupies, promoters, hangers-on and historians, sessions, release events and those special behind-the-scenes moments that keep it all real.

Ian Faith: The Boston gig has been cancelled..
David St Hubbins: What?
Ian Faith: Yeah i wouldn’t worry about it though, it’s not a big college town
–This is Spinal Tap

Most likely the first movie you thought of when you heard about this series. This quintessential “mockumentary” was directed by Rob Reiner, and written by Christopher Guest, Michael McKean, Harry Shearer, and Rob Reiner.

Spinal Tap, the fictional band, consisted of talented musicians who were also master improvisers, as the script was a mere sketch for them to fill with their own dialogue. They poked holes in the pretensions of rock bands, and parodied the tropes of music documentaries. It is still the gold standard, still resonating today. I think it might be illegal to be in a band and not have watched This is Spinal Tap together. Mention any of the following phrases to anybody in a band: hallway maze, rotating drummers, goes to 11, Stonehenge and you will get a knowing smile or more likely several lines of dialogue.

Steven Tyler supposedly did not “get” the movie at all. Google the Aerosmith album Rock in a Hard Place, which came out two years before Spinal Tap, and you’ll see why. Hey Joe Perry loved it!

In 2002, the movie was declared “culturally, historically, or aesthetically significant” by the Library of Congress.

The timelessness of this movie still pleasantly surprises me. May there always be earnest bands dancing along that “fine line between stupid and ..uh..clever”

Fun Fact: On Imdb, This is Spinal Tap is the only movie with an eleven star rating system.