This is Not a Bill 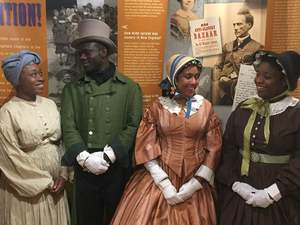 This is Not a Bill is an immersive, traveling play about Salem’s involvement in the Underground Railroad in the mid-19th century; this new piece is set to premiere in downtown Salem on July 20-21 and August 17-18. Tickets are $18 and will go on sale at https://thisisnotabill.bpt.me/ on July 1.

In 1854, Salem, MA is undergoing a transformation--as a new hub of the abolitionist movement, the city is home to both escaped and free-born people of color from all over the country. Among them are Patty and Athumani, who have recently escaped their bondage on a Virginia plantation. While the young couple have succeeded in running as far north as Salem, their futures are not secure just yet. The Fugitive Slave Act is still in effect, encouraging the capture and return of runaway slaves, paying anyone who betrays them to their owners, and prosecuting those who assist enslaved people on their way to freedom. Free people of color are also in danger of being kidnapped and sold into slavery. Salem has abundant opportunities to start a new life, but the better known it becomes, the more attractive it is to bounty hunters.

Assisted by free-born abolitionists Sarah Parker Remond and Charlotte Forten, as well as the audience--in role as workers on the Underground Railroad--Patty and Athumani must decide whether to stay in Salem or escape even further north to Canada. Consisting of stops at historic locations all over downtown Salem, the group must travel only at nightfall from a secret location, announced to the audience before undergoing each trip on the Railroad.

On portraying abolitionist and entrepreneur Sarah Parker Remond, cast member Kathy-Ann Hart says the experience “is awesome in all the ways that one might use that word. I feel honored to bring her to life. And, I feel the weight of doing justice by her, who she was, and her/her family’s contribution to abolitionist history.” Playwright Alexia Rowe affirms that while African-American history in Salem is significantly lesser known, this only enhances the relevance of the piece: “I feel it is important to educate ourselves further about the things that are not commonly taught to us, so that we can understand more about the world around us.”

A moving work of empathy and perseverance, This is Not a Bill leads the audience on an night-time journey through the safehouses and institutions that brought an entire city together in the name of freedom.


For tickets:
General admission: $18
https://thisisnotabill.bpt.me/
Tickets will go on sale on July 1st