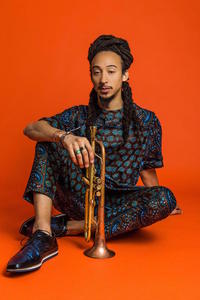 Theo Croker’s 2016 release “Escape Velocity” is ranked the #1 Jazz Album in the UK by Echoes Magazine. The accolades continue worldwide with iTunes (Global), The Observer (US) and others naming the album as one of the Top Jazz albums of 2016. With a global spotlight release on iTunes and Amazon, now over 2 million plays on Spotify, and over 1 million plays for the track “No Escape from Bliss” it is clear that listeners agree.

Upon the album’s release, The Wall Street Journal heralded the album as “ timeless and of-the-moment”. His live performances, the Huffington Post lauded Croker’s band DVRKFUNK, saying they were “a tight front line that weave in serpentine precision and are backed by a powerful rhythm section that pushes the groove.” Croker recently lent his inimitable talents as composer, arranger and musician to J. Cole’s latest release on title track “4 Your Eyez Only”, as well as “For Whom the Bell Tolls” and “Ville Mentality”. He is also featured on Common’s newest album, “Black America Again.”

As the grandson of the late trumpeter Doc Cheatham, and former student of legendary jazz trumpeter Donald Byrd, trumpeter Theo Croker is an artist steeped in jazz tradition. Well-versed in the swing, bop, and modal styles of acoustic jazz, Croker’s own music reveals a love of organic funk, soul, and gooey, groove-oriented hip-hop. It’s a vital amalgam that would have pleased the forward-thinking Byrd, whose own ’70s funk-jazz albums are an obvious touchstone for Croker on his hypnotically enlightened 2016 effort Escape Velocity.