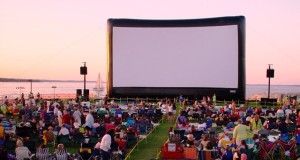 An enormous great white shark terrorizes a summer resort town, where a police chief, a fisherman and a marine biologist realize they're "gonna need a bigger boat" to battle the blood thirsty beast.

An animated adventure for all ages, with original music and an allstar cast, Smallfoot turns the Bigfoot legend upside down when a bright young Yeti finds something he thought didn’t exista human. News of this “smallfoot” throws the simple Yeti community into an uproar over what else might be out there in the big world beyond their snowy village, in an all new story about friendship, courage and the joy of discovery.

Mary Poppins returns during Michael's most desperate hour to lend him a helping hand. With his house in danger of being repossessed, she whips up a little magic to remind him of the importance of family.

Rocky Balboa, a small time, struggling boxer from working class Philadelphia, is arbitrarily chosen to take on the reigning world heavyweight champion, Apollo Creed, when the undefeated fighters scheduled opponent is injured. The match is suppose to be easily won by Creed, but someone forgot to tell Rocky who sees this as his only shot at the big time.

Science fiction film about Elliot, a young boy who befriends an alien being trapped on Earth and trying to find his way home. Elliot and his siblings help the alien return home while trying to keep him hidden from their mother and the government. PG, 115 min

The Incredibles hero family takes on a new mission, which involves a change in family roles: Bob Parr (Mr Incredible) must manage the house while his wife Helen (Elastigirl) goes out to save the world.

See your favorite video game villain Wreck-It-Ralph in this funfilled adventure as he must brave theInternet to help Vanellope fix her game Sugar Rush.

Note: Entertainment is from 6PM to 8PM with Jim the DJ, inflatables, popcorn and cotton candy. Movie begins at dusk. Rain date of the following night (Friday). Check back for weather updates.

See all other #freemovies series this summer.