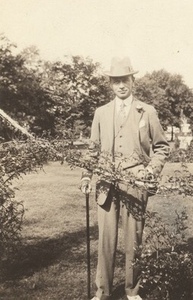 Pride Month might be over, but LGBTQ+ history is important year-round. Join us (virtually) for three events this summer to continue the discussion.

The short documentary film The Wounded Eros explores the relationship between Charlie Gibson’s literary career and the material culture of the Gibson House, within the context of turn-of-the-twentieth-century gay Boston. A showing of this 12-minute film will be followed by a discussion with documentary historian Todd S. Gernes. Audience questions will be welcome.​

Todd S. Gernes is an associate professor of history at Stonehill College. He is presently writing a book about Charles Hammond Gibson Jr. and his literary circle in late-nineteenth-century Boston and beyond. Professor Gernes is a member of the board of the Gibson House Museum.

Suggested donation is $5-$15. The event will take place via Zoom. Further details, the recipe to our themed cocktail, and additional resources will be sent to registrants who reserve at least two days in advance.

The Gibson House is a historic house museum located in the Back Bay neighborhood of Boston. Now a National Historic Landmark, the home served as residence to three generations of Gibson family members and their household staff between 1859 and 1954. The Museum’s four floors of period rooms, including the original kitchen, are a time capsule of domestic life in the nineteenth and early twentieth centuries. www.thegibsonhouse.org