The Women Who Built Hollywood 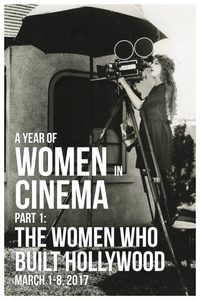 Beginning in March of 2017, the Brattle will be presenting “A Year of Women in Cinema.” For the following 12 months, each one of our bi-monthly calendars will include at least one repertory series highlighting films by, for, or about women. We kick off this effort with a program of films from the early days of Hollywood that were directed, written, edited, produced, or just plain willed into existence by women.

A somewhat forgotten power at the dawn of Hollywood, women were early adopters of jobs that men found beneath them – and hence became pioneers in this “fad” that would soon go on to dominate world culture. Lois Weber and Dorothy Arzner were both prolific and powerful directors; Frances Marion was an extremely influential and in-demand screenwriter; the witty author Anita Loos was discovered by D.W. Griffith; star Mary Pickford co-founded United Artists and produced many of her own pictures; comedienne Mabel Normand starred in over 200 films and rivaled Charlie Chaplin as the queen of silent comedy; and editors Viola Lawrence and Margaret Booth both went on to long careers as department supervisors at Columbia Pictures and MGM. All of these women are represented in the films included in this series, alongside other powerful female artists who contributed to the glamorous early days of the Dream Factory.