The Winter Solstice in Story and Song 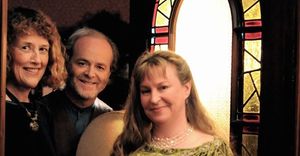 Celebrate the longest nights with Solstice stories and songs evoking the warmth of the season. Oracle award-winning storyteller Diane Edgecomb weaves together a tapestry of ancient tales: evergreen myths, legends of light and entertaining stories that reveal the deep meaning behind our winter holiday traditions. This theatrical storytelling, accompanied by Celtic harper Margot Chamberlain and multi-instrumentalist Tom Megan, features the Scandinavian “Legend of the Mistletoe,” humorous Wassail traditions and the poignant Greek myth “The Coming of the Days of Peace.” Complimentary refreshments include a cider-based Wassail Bowle will be served in the Loring Greenough House’s elegant eighteenth century dining room.

About Diane Edgecomb
Winner of the Oracle Award for Storytelling Excellence in the Northeast, Diane is known for the passion and depth of her work whether embodying a true story or bringing renewed meaning to traditional tales. A featured teller at the National Storytelling Festival, the International Storytelling Center and on National Public Radio, Diane’s transformational telling style, in which she fully embodies the tale brings listeners into the heart of the moment. When accompanied by Celtic harper Margot Chamberlain and multi-instrumentalist Tom Megan, the performances include a rich variety of songs and music from cultures around the world. Publisher’s Weekly stated, “Edgecomb is a virtuoso of the spoken word…an entire cast rolled into one!”
More information can be found on her website: LIVINGMYTH.COM