The Vanishing Theater presents: 'Mind of a Magician' 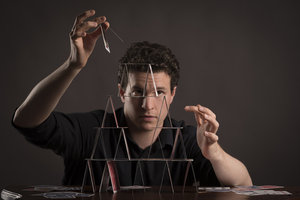 The Mind of a Magician is a brand new magic performance from magician Evan Northrup.

This interactive show will include never before seen magic effects, works in progress and the musings of a magician, all compiled into a unique, one-night show. Over the last 20 years, Evan has maintained mountains of notebooks filled with conceptual work for new magical experiences that will finally be brought to life.

This will be the fourth show in the 12-month series and every month will feature an entirely new production. There will be two show times (an earlier show at 7:00 and a later show at 9:00). Doors open twenty minutes before showtime, and make sure you arrive early to see what mysteries pop up before the show officially begins!