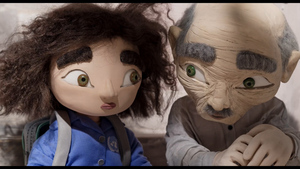 This beautifully animated film tells the story of Wardi, an 11-year-old Palestinian girl who lives with her family in the Lebanese refugee camp where she was born. Her beloved great-grandfather, ‘Sidi,' was one of the first people to settle in the camp after being exiled from his home and homeland, Palestine, in 1948. The day Sidi gives Wardi the key to his old house back in the Galilee, she fears he may have lost hope of someday returning home. As she searches for Sidi's lost hope around the camp, she collects her family's testimonies, from one generation to the next.

Each year, guest filmmakers from various countries and expert commentators add contextual depth to the films. BPFF also offers ancillary cultural programming including concerts by Palestinian musicians and art exhibits by or about Palestinians. In this way, the festival seeks to engage local audiences and sustain Palestinian arts and culture in the city throughout the year, in addition to collaborating with other such festivals in the US and worldwide.