The Thing and They Live at Medfield State Hospital 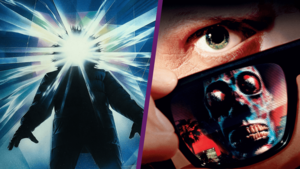 See two John Carpenter classics at our pop-up drive in on the beautiful and historic grounds of Medfield State Hospital!

Join us for two iconic, heart-pounding thrillers from director John Carpenter. Featuring mind-boggling practical effects from Rob Bottin, and tension that can only be cut with a flame-thrower, The Thing will chill you to the marrow! When an alien being begins killing off and assuming the identities of Antarctic scientists, it's up to rough and rugged R.J. MacReady (Kurt Russell) to battle the creature as well as his paranoid colleagues. In They Live humanity's last chance lies with a lone drifter who stumbles upon a harrowing discovery: a unique pair of sunglasses that reveal the terrifying truth that aliens are gaining control of the earth by masquerading as humans and lulling the public into submission.

We do encourage you to arrive early if you would like to walk the grounds of Medfield State Hospital before the film begins at sundown, approximately 7pm. These events are rain or shine, and tickets are non-refundable.

We’ll be projecting the film onto a 40 foot inflatable screen using state of the art equipment provided by Boston Light and Sound.

Medfield State Hospital is a historic former psychiatric hospital complex at 45 Hospital Road in Medfield, Massachusetts. The asylum was established in 1892 as the state's first facility for the mentally ill. It was formally renamed "Medfield State Hospital" in 1914 and remained in operation until closing its doors for good in 2003. It has also served as the shooting location for the films Shutter Island, New Mutants, The Box, Knives Out, and more.