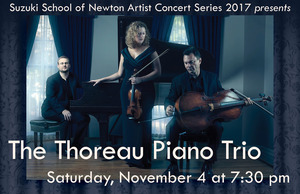 This fall, the Suzuki School of Newton brings the Thoreau Piano Trio for a public fundraising concert as part of its Artist Concert Series, which raises money for music scholarships.

The Thoreau Piano Trio, whose members have appeared in concert halls on four continents and received numerous awards and accolades, including a Grammy nomination, performs across the United States and in notable and historic venues throughout New England. They were a featured ensemble at the Warebrook Contemporary Music Festival and the White Lake Chamber Music Festival, and is now the resident ensemble of the newly-preserved and acoustically superb Chelmsford Center for the Arts in Massachusetts, presenting each year an exciting series of beautiful and inspiring concerts.

Since its founding in 1986 by Gwendline Thornblade, the Suzuki School of Newton's mission has been to instill in children at an early age a love and respect for music that will last them throughout their lives. Based upon the teaching philosophy of Dr. Shinichi Suzuki, the schools music instruction endeavors to develop noble-hearted human beings and to help children build self-respect, self-confidence, and a capacity for self-discipline through instrumental music education.

No child is turned away for financial hardship. The James Thornblade Memorial Scholarship Fund enables need-based tuition assistance to students from diverse backgrounds and communities from throughout eastern Massachusetts to attend the Suzuki School of Newton. This fund is supported in part by concerts like this one, where 100% of the ticket price is deposited directly into the scholarship fund.

The Artist Concert Series was established to present high caliber, renowned artists in concert as part of the educational experience of SSN students and the ongoing cultural and intellectual life of the larger community.