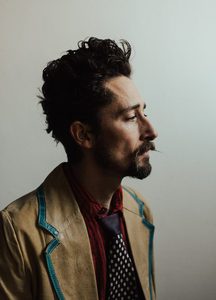 From the salvaged sounds of American juke joints, back porches, honky tonks and rock clubs, The Suitcase Junket conjures an entirely new sound in his essential rock collection Pile Driver.

"After seeing and hearing the unique musical output of Matt Lorenz, “The Suitcase Junket”, we were enthralled ... " -- Make magazine, which premiered The Suitcase Junket's official video "Mountain of Mind"
makezine.com/2017/09/11/garbage-art-diy-instruments-swamp-yankee/

The Suitcase Junket's "songs range from the arty grunge of “The Next Act” and punk-blues stomp of “Evangeline” to the fingerpicked “Busted Gut” and the uplifting “Mountain of Mind,” its support for people in transition sealed by a catchy wordless chorus. They appear on Pile Driver, his fourth album and April debut on Signature Sounds, the same label that launched Lake Street Dive ... " -- Improper Bostonian

"Lorenz, a master of multitasking, plays guitar while drumming with his feet and boasts the astonishing ability to sing two notes at once using a technique similar to the one made famous by Tuvan throat singers. When it comes right down to it, though, Lorenz relies as much on methods tried-and-true: bluesy guitar riffs, tenacious melodies and a singing voice both weathered and nimble. You don’t need to witness his physics-defying performance to be captivated; the music stands on its own." -- WBUR, Boston