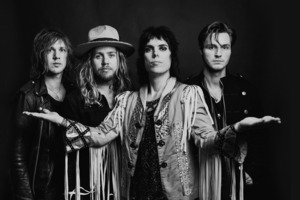 Forming The Struts in Derby, England, in 2012, all four members began making music as teenagers, initially finding inspiration in groups like Oasis and the Libertines and then tracking their idols’ influences to discover the glam bands that would one day shape their own sound. “When we first started, we both just wanted to make fun, happy rock songs with big choruses—the kind of thing that bands like Slade and T. Rex used to do,” says Slack of his collaboration with Spiller. The trademark tongue-in-cheek swagger of classic glam also played a key part in the naming of the band, Spiller points out. “We were in rehearsals and someone saw me strutting around as we were playing, and made the suggestion that we call ourselves The Struts,” he says. “We loved that from day one—it absolutely represents what we’re about.”

Largely on the strength of their dynamic live performance, the Struts fast built up a major following and started selling out shows all across Europe. Along with landing the Stade de France gig with the Rolling Stones, the band took the stage at the 2014 Isle of Wight Festival, with Spiller decked out in a shimmering-blue cape custom-made for him by Zandra Rhodes (the legendary designer who formerly created costumes for Queen’s Freddie Mercury and Brian May). Over the past few years Spiller’s role as a style idol has prevailed, with the New York Times recently spotlighting the singer in a fashion-centric feature and Ray Brown (an Australian designer who’s also dreamed up outfits for AC/DC, Ozzy Osbourne, and Lady Gaga) coming up with costumes for The Struts’ run of dates with Mötley Crüe.

In their lavish stage presence and magnetic appeal, The Struts have more than demonstrated a preternatural command of monumental crowds. But while all that glitz and flash never fail to thrill, the band’s impassioned music and high-powered spirit also fulfill a far greater purpose. “The main mission of the band is to bring back that feeling of fun and rock & roll, especially to all those people who are bored by what’s going on these days,” says Spiller. “We really believe that music, when it’s done right, can help you escape the present moment, and then just send you somewhere else entirely.”