The Splinters at Square Root Rozzie 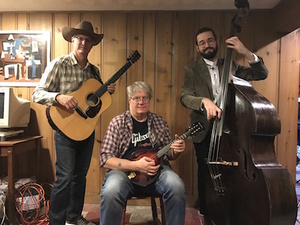 Combining bluegrass with country and folk roots, the Splinters offer an energetic take on traditional music. The Metro called the sound “bluegrass mayhem” (!) and they were listed as a “band to watch”, during the 2018 Somerville Porchfest by NBC Boston. The repertoire spans from haunting renditions of old songs to raucous bluegrass and fiddle tunes to more modern classics from some of the best songwriters out there.

The Splinters were formed by Berklee roommates Chris Reckling (guitar, vocals) and J Johnson (mandolin, vocals) in 2010, after spending many years playing rock, jazz, and folk music around town. They added Garrett Wallace (bass, vocals) in 2016 to keep the groove going and add a third harmony part.

The Splinters released their first album in November 2016 as a duo, "Old Songs", which tells you where they are coming from - mining tradition for new meaning, all while tapping your feet and having a good time!