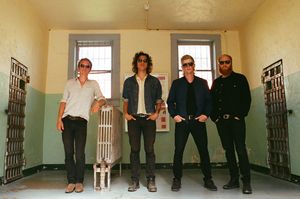 The Social Animals is a full time, van-living young band. They speak through elegantly sarcastic, thoughtful lyrics with memorable melodies splattered across a canvas of indie rock instrumentation. They don't do backflips at their live shows or slide across their knees into guitar solos. Instead, they play their music passionately and honestly, carrying both the intensity to move feet and the delicacy to keep them still. Between songs, their dry commentary on the status of their lives and the world around them appeals to the type of person who, perhaps, spends time actually reading through a band bio.

Releasing their debut EP, "Formative Years" in late summer of 2016, The Social Animals have laid a sturdy foundation for the character and direction of the band. Songs like “Cold" marry the grittiness of an honest band cramped in a Chevy Express with the pop sensibility of Tom Petty. "I Guess In America" offers a tongue-in-cheek outlook on the process of dealing with personal sadness under the seemingly comfortable umbrella of the U.S., and the privileges (or lack thereof) that come with it.