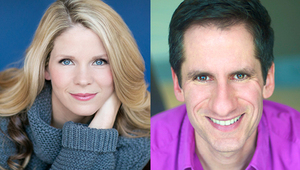 Kelli can currently be seen starring in the Broadway revival of Kiss Me, Kate, for which she received a 2019 Tony Award nomination. On Broadway, Kelli’s portrayal of Anna Leonowens in the critically acclaimed revival of The King and I garnered her the 2015 Tony Award, along with GRAMMY, Drama League and Outer Critics and Oliver nominations. She then reprised the role in her West End debut last summer, for which The Times hailed her as “Broadway musical’s undisputed queen” adding, “Kelli O’Hara does not just play Anna, she owns the part.” Other Broadway credits include The Bridges of Madison County, Nice Work if You Can Get It, South Pacific, The Pajama Game, The Light in the Piazza, Sweet Smell of Success, Follies, Dracula and Jekyll and Hyde. Regional/off-Broadway credits include Far From Heaven, King Lear, Bells are Ringing, Sunday in the Park with George and My Life with Albertine.
Through stories from Kelli’s unique career, as well as musical performances through the songs for which she’s most known, the evening promises to bring audiences a new perspective on the songs they know and love.
Produced by Emerson Colonial Theatre and Mark Cortale, The Seth Rudetsky Series brings hilarious and insightful conversation between Seth and each of the artists, anchored in each star’s own brand of blinding talent. Other dates in the series: Jessie Mueller on July 8 and Cheyenne Jackson on October 4.