The Seine: the River That Made Paris 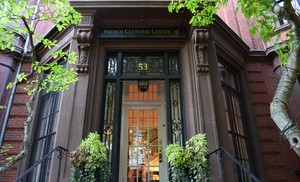 The French Cultural Center is excited to welcome back Elaine Sciolino! Elaine’s forthcoming book is a brilliantly researched journey down the Seine and a look at French history and contemporary culture.

Event in English. Open to the public; registration required. This author talk will be followed by a Q&A with the author and a reception with light refreshments.

Books will be available for purchase during the book signing and reception following the talk.

About The Seine: The River that Made Paris
Traveling from the source of the Seine on a remote plateau of Burgundy to the estuary where its waters meet the sea, and to the cities, towns, islands, ports, and bridges in between, Sciolino tells the story of the Seine. Her use of the river’s rich history, mythology, eminence in art, literature, and film make this a beguiling journey. Through this landscape, she weaves the lively characters of Paris's most famous river—a barge woman, a riverbank bookseller, a houseboat dweller, a famous cameraman known for capturing the river’s light. Elaine patrols with river police, rows with a restorer of antique boats, sips champagne at a vineyard along the river and even dares to swim in the waters of the Seine, inviting readers along with each step.

About Elaine Sciolino
Elaine Sciolino is a contributing writer and former Paris bureau chief for The New York Times, based in France since 2002. In 2010, Sciolino was decorated chevalier of the Legion of Honor, the highest honor of the French state, for her “special contribution” to the friendship between France and the United States. In 2019, Sciolino became a member of the Advisory Board of Reporters Without Borders, the Paris-based international advocacy organization promoting freedom of information and freedom of the press. In 2018, she received an honorary Doctor of Literature degree from the University of London.

01/11/2019 18:30:00 01/11/2019 21:00:00 15 The Seine: the River That Made Paris The French Cultural Center is excited to welcome back Elaine Sciolino! Elaine’s forthcoming book is a brilliantly researched journey down the Seine and a look at French history and contemporary cul... French Cultural Center, Boston, MA 02116 Organizer Organizer e-mail false DD/MM/YYYY Reddit