The Second City: Made in America (Some Assembly Required) 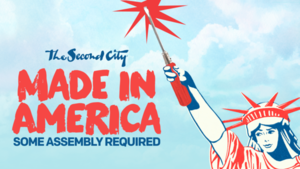 The Second City opened its doors on a snowy Chicago night in December of 1959. No one could have guessed that this small cabaret theatre would become the most influential and prolific comedy theatre in the world. With its roots in the improvisational games of Viola Spolin, The Second City developed an entirely unique way of creating and performing comedy. Founded by Spolin's son, Paul Sills, along with Howard Alk and Bernie Sahlins, The Second City was experimental and unconventional in its approach to both theatre and comedy. At a time when mother-in-law jokes were more the fashion, The Second City railed against the conformist culture with scenes that spoke to a younger generation. The Broadway success of Mike Nichols and Elaine May (members of The Second City's predecessor, The Compass Players) put attention on the fledgling company. Soon, alumni of The Second City -- such as Alan Arkin, Barbara Harris, Robert Klein, David Steinberg and Fred Willard -- began to cement the theater's reputation for developing the finest comedic voices of each and every generation. With the debut of NBC's Saturday Night Live, populated by Second City Alums John Belushi, Dan Aykroyd, and Gilda Radner, the theatre became internationally known for its ever-increasing roster of comedy superstars. Watch The Second City: Made in America (Some Assembly Required) at The Wilbur Theatre in Boston.