The Return of the King: Music of the English Restoration 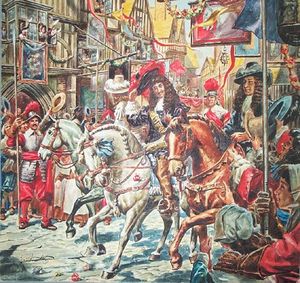 Music for Viols and Friends continues its season on Friday, January 11, 2019, with a concert of late 17th-century and early 18th-century English instrumental music, performed by Très Maresienne (Lisa Brooke, violin; Carol Lewis, viola da gamba; Olav Chris Henriksen, theorbo and baroque lute). Entitled “The Return of the King”, the program will include works by Purcell, Finger, Locke, Simpson, Matteis and others. The concert will take place at 8:00 pm in Lindsay Chapel, First Church in Cambridge Congregational, 11 Garden St. (entrance on Mason St.), Cambridge, MA. Admission is $25 general admission; $20 seniors, students, low income. For further information, or to receive a series brochure, call (617) 776-0692 or go to www.duomaresienne.com

The coronation of Charles II, the first king of England after that country’s civil war, signaled the return of the Stuart family to rule the British Isles. This meant that musicians like John Jenkins, who had earned his living through royal sponsorship before the war, were now able to return to the court and be royal servants again. Younger English prodigies, like Matthew Locke and Henry Purcell, and foreign virtuosi, including Gottfried Finger and Nicola Matteis, also found royal employment, and all of this resulted in a renewed golden age of musical activity in England. Come hear Très Maresienne play a selection of the finest sonatas, suites, fantasies and grounds, some familiar, some unfamiliar, by these composers, as well as by Thomas Mace, Christopher Simpson and William Young.

Très Maresienne performed in winter 2017-18 as part of the Cambridge Society for Early Music concert series. Violinist Lisa Brooke is concertmaster of Symphony by the Sea, and she currently plays with Coro Allegro, Arcadia, and New England Classical Singers, among others. She is a founding member of Très, and is frequently heard as a soloist and with many ensembles in Boston and New York. Carol Lewis and Olav Chris Henriksen are also frequent collaborators with ensembles in the U.S. and abroad, including Capriccio Stravagante, the Boston Camerata and Capella Clausura.