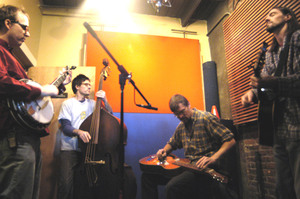 It’s still as Alan Lomax wrote “folk music in overdrive” but the Resophonics introduce elements frequently lacking in modern bluegrass music – great original songs played with passion, energy and humor that would be as at home in a rock club as on a festival stage. Longtime members Sean Staples, Eric Royer, Tim Kelly and Paul Kochanski combine elements of the traditional string band and the contemporary songwriter to create a unique sound that is rooted in tradition without sounding dated, modern yet with substance. Following over a decade of local shows and international touring that culminated in a Boston Music Award as Outstanding Folk Act, the band went on hiatus in 2010. Tonight they joyfully reunite in the familiar and homey confines of Club Passim for a special show featuring new music as well as songs from their four studio recordings. The Resophonics are back!