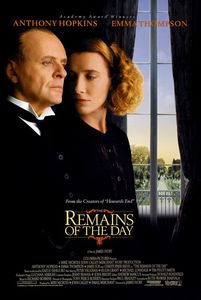 Synopsis: During the 1930s, James Stevens (Anthony Hopkins) serves as a proper English butler to the doltish Lord Darlington (James Fox). Stevens is so dedicated that he forgoes visiting his father on his deathbed in order to serve, and overlooks Darlington's Nazi sympathies and growing anti-Semitism. Twenty years after his employer's death, Stevens tries to reconnect with Miss Kenton (Emma Thompson), Darlington's head housekeeper, and begins to regret his loyalty to his former master.

The British Film Institute ranked The Remains of the Day the 64th greatest British film of the 20th century.