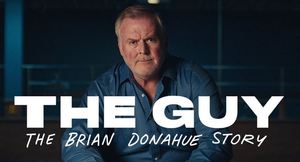 Come and meet Quincy's own Brian Donahue, a stuntman in Hollywood for more than 20 years. He attended St. Mary's School in Quincy and Archbishop Williams in Braintree. His athletic and musical theater background paved his way to an acting career, starting at the Indiana Jones Stunt Spectacular at Disney MGM Studios. That gig led to others in film, TV, print, radio, live theatre, stand up comedy, and more. He's appeared in The Deuce, Blue Bloods, The Black Donnellys, WWF Challenge, and The Late Show with David Letterman.

We'll also welcome E.J. McLeavey-Fisher, director of the short documentary film about Donahue, The Guy: The Brian Donahue Story. We'll be viewing the documentary, and then they'll be telling us all about their work. Check out the documentary's trailer here: http://ej-mf.com/portfolio/the-guy-the-brian-donahue-story-trailer.