The Piano Sonatas of George Walker 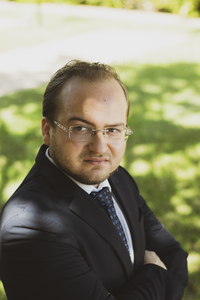 Composer George Walker (1922 – 2018) was the first African-American to receive the Pulitzer Prize for music in 1996. He was also the first African-American to earn a D.M.A. from Eastman (1956). He has more than 100 compositions for orchestra, chamber ensemble, chorus, piano, voice, and organ. His works have been performed by every major American orchestra, including the NY Philharmonic and Philadelphia Orchestra. His most recently published work is Sinfonia No. 5 (2016), a recording of which was released by Albany Records in January 2018.

Albanian pianist Redi Llupa has distinguished himself by performing in prestigious venues in Europe, North and South America, and Asia. An avid advocate of contemporary repertoire, Llupa continuously collaborates with and performs music by living composers. He is the dedicatee of Aleksandër Peçi’s Muzikë Kabaistike, Ermir Bejo’s Op. 1, and Joseph Klein’s Der Saus und Braus for solo piano. Since 2015, he worked closely with Pulitzer Prize winning composer George Walker, whose piano sonatas constituted Mr. Llupa’s dissertation topic. He gave the world premiere performance of Walker’s complete piano sonatas in 2017 at Kaleidoscope MusArt’s concert season. Noted was also the April 2018 performance at the Eastman School of Music in honor of the composer’s 95th birthday where Llupa was invited personally by Dr. Walker to represent his pianistic output. In May of 2019, he gave the first European performance of the complete sonatas at ReMusica International Festival in Pristina, Kosovo. An active performer and promoter of music by living Albanian composers, Llupa has given numerous world and U.S. premieres of works by Aleksandër Peçi, Thomas Simaku, Rafet Rudi, Vasil S. Tole, and Ermir Bejo. As a guest artist and lecturer, Mr. Llupa has been invited by prestigious institutions, such as the Eastman School of Music, the University of North Texas, the University of Louisville, the University of Oregon, the University of Miami, the University of Virginia, Oklahoma University, the University of Arts in Tirana, the National University of Natal, and Universitad de Caldas. Llupa has performed at Festival Baltimore at UMBC, PIANODROM International Festival in Tirana, ReMusica International Festival in Pristina, James Madison Contemporary Music Festival in Virginia, and New Century New Voices in Vermont.

Named in memory of John Kleshinski, former Music Center Board President and student, our concerts provide a great opportunity for everyone to enjoy a diverse sampling of musical instruments and genres. Our informal and family-friendly concerts are free and run approximately ninety minutes in length. This season features works by women and POC composers.