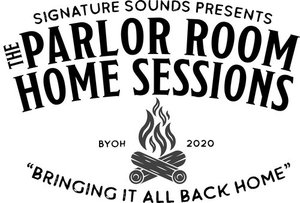 Signature Sounds Presents has announced an online concert series in response to the COVID-19 crisis.

All performances start at 8 PM, EST and are accessed via www.signaturesounds.com/homesessions. More bands will be announced shortly and will include Parlor Room and Green River Festival favorites along with more artists on the Signature Sounds roster.

FROM SIGNATURE SOUNDS HEAD JIM OLSEN: “Now more than ever, it’s important for us to stay connected and support the artists who bring us so much joy. Since it’ll be a while until we can gather again, let’s share the gift of music together and look forward to better days ahead.”

DONATE TO THE ARTISTS VIA PAYPAL/VENMO: https://paypal.me/homesessionstipjar

Signature Sounds was formed by Jim Olsen and Mark Thayer in 1995 to promote the burgeoning acoustic music scene in and around Northampton, MA. Since our inception, we've released over 150 albums of singer-songwriter, Americana, modern folk and rock music. Signature Sounds Recordings are distributed exclusively worldwide by Redeye Worldwide.