The Palatine Wreck : The Legend of the New England Ghost Ship 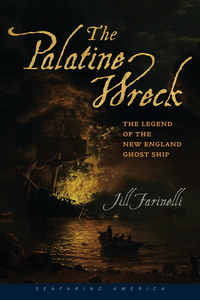 Two days after Christmas in 1738, a British merchant ship traveling from the Netherlands to Pennsylvania grounded in a blizzard on the northern tip of Block Island, 12 miles off the Rhode Island coast. The ship carried emigrants from the Palatinate and neighboring territories in what is now southwest Germany. The 105 passengers on board—sick, frozen, and starving—were all that remained of 340 men, women, and children, who left their homeland the previous spring to move to America. They now found themselves castaways, on the verge of death, and at the mercy of a community of strangers whose language they did not speak.

From this incident sprang one of New England’s most chilling maritime mysteries. Shortly after the wreck, stories began circulating that the passengers had been mistreated by the ship’s crew and by some of the islanders. The stories persisted, transforming over time as stories do, and in less than a hundred years, two terrifying versions of the event were in circulation.

In one account, the crew murdered the captain, extorted money from the passengers by prolonging the voyage and withholding food, and then abandoned ship. In the other, the islanders lured the ship ashore with a false signal light, then murdered and robbed all on board. Some claimed the ship was set ablaze to hide evidence of crimes. The stories were fueled by reports of a fiery ghost ship first seen drifting in Block Island Sound on the one-year anniversary of the wreck. These tales became known as the legend of the Palatine, the name given to the ship in later years because of where the passengers were from. The flaming apparition was nicknamed the Palatine Light.

The eerie phenomenon has been witnessed by hundreds of people over the centuries, and numerous scientific theories have been offered as to its origin. Its continued reappearance, along with the popularization of the tale by some of nineteenth-century America’s most notable writers—among them Richard Henry Dana Sr., John Greenleaf Whittier, Edward Everett Hale, and Thomas Wentworth Higginson—has helped keep the legend alive. This, despite evidence that the vessel, whose actual name was the Princess Augusta, was never abandoned, lured ashore, or destroyed by fire.
So how did the rumors at the heart of the legend begin? What really happened to the Princess Augusta and to the souls she carried on her final, fatal voyage?

JILL FARINELLI graduated from William Smith College with a Bachelor of Arts degree in American Studies and English. Determined to live near the ocean in a city steeped in history, she moved to the Boston area where, for the past twenty-five years, she has worked as a freelance writer and editor, primarily in educational publishing. This is her first work of historical nonfiction, on a subject that captured her imagination after spending a week with friends on Block Island ten years ago.