The Outlaw Ocean: Journeys Across the Untamed Frontier - a Conversation with Living on Earth 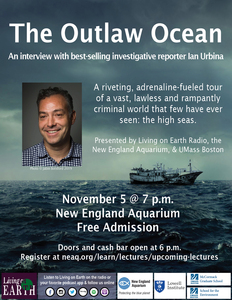 Urbina’s book tours a lawless and rampantly criminal world that few have ever seen: the untamed ocean, one of the last frontiers on our planet. The high seas are too big to police, and under no clear international authority, so these immense regions of treacherous water play host to rampant criminality and exploitation.

This event is part of Good Reads on Earth, a series of events where public radio program Living on Earth holds live radio interviews with authors of the latest environmental books. To learn more about Living on Earth, please visit loe.org.

Ian Urbina is an investigative reporter for The New York Times. He has won a Pulitzer Prize for Breaking News and a George Polk Award for Foreign Reporting. Several of his stories have been developed into major feature films and one was nominated for an Emmy Award. He has degrees in history and cultural anthropology from Georgetown University and the University of Chicago. Before joining the Times, he was a Fulbright Fellow in Cuba and he also wrote about the Middle East and Africa for various outlets including the Los Angeles Times, Vanity Fair, and Harper’s Magazine. He lives in Washington, D.C., with his family.