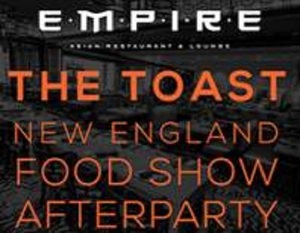 Kicking off the night at 5:00PM, restaurant owners, chefs, service personnel, back of house staff as well at the industry’s business partners and general public can mix, mingle, network and exchange stories about the trials and tribulations encountered in everyone’s favorite industry at this lively celebratory event. Included in the $25 admission ticket, guests can enjoy unlimited sushi from Empire as well as delicious passed appetizers and cocktails. Music will be provided by DJ Liz Ladoux, one of the top female DJs in the United States who is best known for her signature sound of a well-rounded blend of old and new, spanning the spectrum of genres from Chicago House, EDM, Old Disco, to 80’s Pop, and to top it off, “The Voice” finalist and Massachusetts native, Sam James will give an exclusive performance, not to be missed! Originally from Worcester, MA, Sam James appeared on season three of “The Voice” and has landed a #5 spot on the iTunes Singer/Songwriter Chart in the U.S. for his debut EP “It Never Happens.”

Admission is $25 per person to the general public and each ticket includes admission, complimentary passed appetizers and a voucher for Empire’s “Sushi Unlimited,” which can also be redeemed at a later date during their weekly Monday night promotion. This event is sponsored by US Wealth Management, BMI and Toast Tab. Don’t miss this opportunity to celebrate alongside the best of the industry during the official after party of the New England Food Show. Tickets for “The Toast” are available for purchase.