The Month of $5 Mai Tais at Sumiao Hunan Kitchen 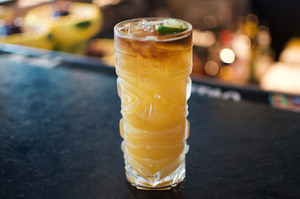 During the month of September, Kendall Square’s newly opened Sumiao Hunan Kitchen will be shaking up its specialty Mai Tai cocktail for only $5. Perfect for students on a budget or for an after-work outing with a group of colleagues, Sumiao’s Hunan-style Mai Tai – a favorite from the bar’s “Tiki” section – is an interpretation of the spirit-forward worldwide classic, paying homage to the original cocktail recipe from Trader Vic Bergeron but with subtle changes to complement its signature Hunan cuisine.

Because Hunan cuisine employs many spicy elements, Sumiao has increased the sweetness of its Mai Tai without adding the abundance of fruit juice that’s often found in a traditional Mai Tai. Complex flavors such as clove, cinnamon, citrus and molasses come with each sip as a result of the decadent Chairman’s Spiced Reserve Rum. Cheers, September.