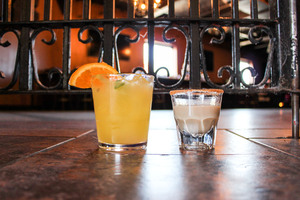 On August 26, Fenway landmark Cask ‘n Flagon will host a viewing party for one of the most anticipated boxing matches in history dubbed “The Money Fight.” As undefeated eleven-time, five-division professional boxing world champion Floyd Mayweather, Jr. and the current UFC Lightweight Champion Conor McGregor take to the ring at the T-Mobile Arena in Nevada, Bostonians won’t miss a hook or a jab as they take a front row seat in front of one of The Cask’s many HDTVs inside its nightclub concept, Oliver’s. While the shots are thrown, boxing faithful can vote by unanimous decision for their favorite contender by ordering up one of two specialty cocktails inspired by the fighters and their monikers. The Mayweather-themed cocktail for the night is the Pretty Boy, a twist on a Golden Cadillac with el Jimador, lemon, lime and Grand Marnier ($9) and the Irish-bred McGregor reps The Notorious shot, a 1-2-3 cinnamon toast punch with Flaming Leprechaun whiskey, RumChata and a cinnamon rim ($9).

With Mayweather coming out of retirement for this battle, the pay-per-view viewership is expected to rival that of the Mayweather vs. Pacquiao fight in 2015. While home-viewers are spending up to $99.95 to watch “The Money Fight” and ringside-viewers in Vegas are shelling out up to $14,995 per ticket, fans can catch all of the action at The Cask – one of the few bars to screen the fight locally – for only $30 per person.

—
Advance tickets only ($30 each) via EventBrite.
This event is reserved for ages 21+. Ticket-holders must enter before 9:30pm.